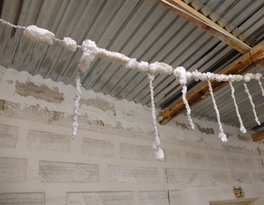 Lithium is a chemical element with the symbol Li, and is classified as a metal. It is third in the periodic table, making it the least dense of all solid elements and the lightest metal. It is silvery-white, soft to touch and reacts briskly with water so it's best stored in oil.

Lithium is the oldest of all drugs used in psychiatry; most of it is over 13 billion years old. The drug given to treat psychiatric illnesses is actually in the form of a salt, usually lithium carbonate or lithium citrate.

As the scientific theory stands, most of the lithium present in the universe was created in the first few seconds during the Big Bang. It is unusual in this regard as the vast majority of elements were formed inside stars billions of years later.

There are 2 stable forms of lithium, 6Li and 7Li, with the latter being most abundant on Earth. Oddly, there is a cosmological mismatch in the abundance of these two

forms (isotopes) which is troubling astrophysicists the world over. Creationist accounts of the origins of the universd also support the primorial status of lithium (Genesis 1:3 "And God said: Let there be Li"). Possibly.

The discovery of lithium is usually credited to Johan Arfwedson who was analysing petalite ore (itself identified by Jose Bonifacio in 1800). At that time, all of the alkali metals described had been discovered in plant matter and lithium was unique in being extracted from a rock. Its origins dictated its name, lithium from the Greek lithos meaning 'stone'. Ironically, its ore petalite was named for its leaf like appearance when cut. Lithium in its elemental form was not isolated until 1821 and only produced in sizeable quantities in the late 1800s. Commercial production began in the 1920's.

Lithium is found throughout the world but not naturally in its elemental form. It is mined in various places such as Chile, Argentina and Nevada. The latter should not be confused with Nirvana, who had a different, somewhat mixed success with lithium.

The first medical application of lithium was in the treatment of gout towards the end of the 19th Century.

Uric acid is made more soluble by the presence of lithium, and since gout was associated with high levels of uric acly, it apparently seemed like a sensible idea to give lithium to those with gout. At that time though, gout as a concept was quite flexible and the term "gouty diathesis" was the focus of much discussion. In essence, it was held that the processes giving rise to gout in

joints were active in, and detrimental to, other bodily systems. Numerous illnesses were therefore attributed to gout. Depression was thought to be in the gouty diathesis and so it wasn't long before lithium was used to treat low mood – first in those with gout and depression, later in depression alone. 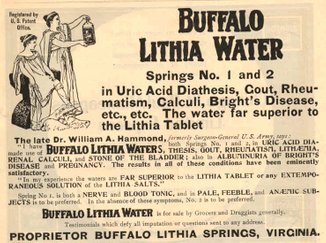 Lithium became something of a panacea during the last century as consumption of spring water containing the salt was popularised. Lithia water was recommended by men of some standing for the treatment of numerous conditions. Lithia water was latterly used to make lithia beer, including a special Christmas edition. Londonderry lithia water sponsored the first female round the world cyclist, who even changed her name to that of the company! Lithium grease may have helped her more, though lithium carbonate is of little use in rapid cycling. Note that some suggest that the ancient Greeks made use of the effects of lithium – Soranus of Ephesus advocated the taking of the alkali waters of his town for the treatment of what appeared to be mania, these waters now known to be rich in lithium.

In 1929, a soft drink trading under the name "bib-labelled lithiated lemon and lime soda" was marketed with some success despite poor timing with the US economic depression. Its more popular name? 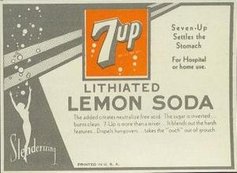 Lithium was added to 7-UP until the 1950's and it would be fun to imagine people getting high on the original Coca-cola only to come down with the 7-UP. However, Coca-cola finally became cocaine-free in the year 7-UP was introduced.

Lithium salt was used as a substitute for common table salt by patients with cardiac disease on a sodium restricted diet. The consequences of higher doses of lithium became clear and numerous toxic effects were noted in this group of people. The research warning of its harmful effects in excess were published in the same year as a seminal paper demonstrating its benefits for people suffering from mania.

Lithium has been formally used in psychiatry for over 60 years, with applications as a mood stabiliser in bipolar disorder, an antidepressant booster in depression and in other conditions such as headache. It may yet find more widespread use in progressive neurological conditions, including some types of dementia. Safety is paramount in such treatment regimes and effective safe blood levels are now well established. Used correctly, lithium can have profound benefits and is the only drug that has been shown to reduce the rate of suicide in those with mood disorders.

Unfortunately, we cannot say exactly how this drug works. There are many theories and a great deal of evidence, but no firm conclusions. What's more, we cannot say with confidence how much of a given dose actually gets into the brain to have these effects.

Team Lithium have developed a scanning technique that allows the concentration and distribution of lithium to be measured in the human brain swiftly and harmlessly. We are developing this equipment and applying it to better understand the nature of bipolar disorder and its treatments.